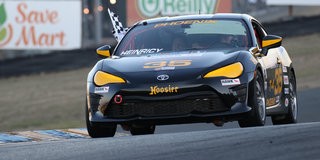 SONOMA, California (October 20, 2018) – John Heinricy from Clarkston, Michigan won his 15th SCCA Runoffs® after a hard battle with Gresham Wagner in Touring 4 (T4). Heinricy, who won American Sedan earlier in the day, took the checkers in his No. 35 Phoenix/Hoosier/Hawk/Mobil 1 Toyota 86, moving closer to Jerry Hansen in overall Runoffs wins and two wins ahead of Duane Davis.

“I like winning and that’s what it’s all about,” Heinricy said. “I just go for the wins.”

Heinricy led the entire race on his way to the win, but not without pressure.

“It was a hard race right from the start,” Heinricy said. “I was thinking I might be able to get inside of Gresham into Turn 2 and that worked out. If it wasn’t for that it would have been very tough. Gresham was on top of me all the time.”

“He didn’t make any real mistakes anywhere and I couldn’t get around him,” Wagner said. “I was just trying. I went off a few times, but that’s pretty much what the car had.”

The 15-time champion was complimentary of his challenger after the hard-fought race.

“It’s really great to see Gresham out here racing,” Heinricy said. “You can tell he is intense, and we need a lot of young people here racing and it’s really fun to see it happening.”

Ross Murray started seventh in the No. 74 Hoosier Mazda RX-8, fought hard early and had the podium spot on lock until he had to fight off a hard-charging Lance Stewart in the closing laps. For his efforts, Murray received the Sunoco Hard Charger award.

“The last three or four laps it was about all I could do to hang on,” Murray said. “I’m very grateful for third. These two guys have been fast all week.”

Nick Leverone finished fourth in the No. 86 Flatout Motorsports Subaru BRZ, and Izzy Sanchez finished fifth in the No. 78 Hoosier/Toyota/Carbotech Toyota 86 racecar.

Live, online video coverage of Runoffs races, presented by Mazda, is available throughout the three days of competition at SCCA.com/live. An audio race call, supplied by the Super Tour Radio broadcast team, is also available at www.SCCA.com/live , as well as live timing and scoring for each National Championship race.