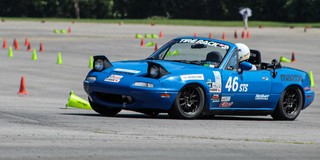 The 2020 Tire Rack SCCA ProSolo® tour spent its fourth consecutive weekend on the road with a stop in Tennessee at Bristol Motor Speedway, July 2-3. This was the site’s first ever ProSolo and fitting two courses on the asphalt surface required some creative problem solving, including placing the start at the opposite end of the pad from standard Championship Tour-style events. While the courses were nearly mirrored, topography meant that they drove quite differently and the right course was around two seconds faster all weekend.

Solo Spec Coupe became a battle amongst friends as the fight came down to Steven Hughes and Matt Waldbaum, who happen to both be admins of the SSC class’ Facebook Group. As the battle went back and forth, just 0.051-second separated the two with Hughes on top for his first ever ProSolo win. Behind Waldbaum, Tyler Kvetko and Tony Savini claimed the remaining trophies in third and fourth respectively, just 0.002 second between them and a total of 0.476 second covering the four trophy winners.

Following in the tradition of the past several weeks, Classic America Muscle drew the most drivers with 34 competitors. It felt like déjà vu from Peru as Devin Taylor claimed the victory by 0.789-second over Justin and Eric Peachey in second and third respectively. Jadrice Toussaint and Steve Waters rounded out the all-Chevrolet top five with Randy Adkins claiming “Top Ford” honors in sixth. Sean Aldinger, Robert Lewis, Berry Langley and Jon Nwanagu claimed the remaining trophies in seventh through tenth respectively. All ten trophy finishers were within just over 1.5 second of each other.

Sunday afternoon, the top eight CAM drivers, excluding Devin Taylor who opted to compete in the Super Challenge instead, faced off in the CAM Challenge. After two rounds, Randy Adkins and Jadrice Toussaint stood alone. As the pair switched sides between runs, Toussaint held the advantage, but Adkins came back with a vengeance to take the narrow win, just 0.004 second.

In both the Ladies and Super Challenges, a Whitener faced a Marcus. In the Ladies Challenge, Kim Whitener from L1 saw Laura Marcus from L2. Whitener picked up a cone on her first run. Despite an absolutely flying second attempt, Marcus eked out the Ladies Challenge win by about 0.8 second in the Toyota Supra. For third place, Jennifer Bedell took the honors over Julie Woodbury despite a cone on her second run. In the Super Challenge, their husbands continued the battle as David Whitener facing David Marcus in the same cars as their wives. This time it was Marcus with the first-run cone. After switching sides, Whitener stretched out his advantage to take the win in the ASP-prepped Tesla Model 3. Just like the Ladies Challenge, third place in the Super Challenge was won despite a cone with Gerry Terranova taking the honors over Darrin DiSimo.

The Bonus Challenge was a battle of contrast in the final pairing with Mike Robinson from E Street facing Keath Marx in the SSP-prepped Chevrolet Corvette. Some difficulty on his first run put Robinson at about a 2-second disadvantage as the drivers switched sides. Marx kept up the pace, earning him the Bonus Challenge win and a free entry to a future event.

The Tire Rack SCCA ProSolo season continues July 17-19, from Hampton Mills in Packwood, WA. More information about this event and the 2020 ProSolo season can be found here.