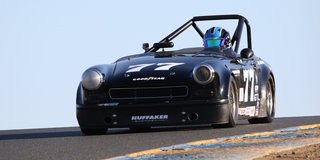 SONOMA, California (October 20, 2018) – For years, Joe Huffaker traveled the country collecting SCCA Runoffs® National Championships, with his first coming in 1992. In 2018, the Runoffs finally came to him and his home track at Sonoma Raceway, and he didn’t waste the opportunity.

Huffaker claimed his 10th gold medal on Saturday, dominating the F Production field in his signature black MG Midget and finishing 34.284 ahead of Bob Bradfield. When all was said and done, the No. 77 Huffaker Engineering/Goodyear/G-Loc Brakes MG Midget led each and every one of the race’s 20 laps between the green flag and the checkered flag.

“This is really special, especially being at home,” Huffaker said. “I didn’t think we could ever have a Runoffs here. This is one of the best tracks in America. My family is here, I grew up in Novato which is 10 minutes away, I live in Petaluma which is 12 minutes away, and we were the first tenant here. There’s a lot to it.

“During the week, there were a couple of moments. There always is. I had a bad day yesterday (in the GTL race, where he had a mechanical problem on the 2nd lap). But my F Production year was perfect. It was the perfect race, it really was.”

Bradfield’s Runoffs debut was one to remember. The San Francisco Region member spent his championship race behind the wheel of No. 36 Ackerman’s Volvo Service Volvo P-1800 owned by Bruce Ackerman and campaigned successfully in SCCA Production racing for years. The offer to drive Ackerman’s car actually came after his ITA Mazda RX-7 was stolen a year ago, and Bradfield was in between race cars.

“It was a good result for an old car. The race itself, I was a little lonely. I had a couple of looks at Joe the first couple of laps, and then we got a gap and separation. There wasn’t anybody behind me, so it was a drive.”

Charlie Campbell’s third Runoffs podium was well earned. Campbell started fifth in the No. 89 Carbotech/JPM/Campbell Brothers Mazda Miata, and had to deal with a pair of Lotus Super Seven’s challenging him for the podium finish.

Campbell put Brian Linn’s No. 37 Hoosier/Carbotech/LINNSpeed machine behind him on lap eight, and was plotting a move around Craig Chima on lap 11 when he pulled the No. 7 Midwest Motorsports/Hoosier/Carbotech Lotus Super Seven off course with a mechanical issue.

From there, Campbell kept Linn in his mirrors for the podium.

“This has been a struggle all week for us,” Campbell said. “We missed a lot of track time, which is huge here. Not that I had anything for either of these guys.

Linn held on for fourth, while Bill Hingston drove his No. 08 JPM/Mazda/Hoosier/V8roadsters Mazda Miata to an eventful fifth after a race-long battle with Inness Eisele. Andrew Wright drove his No. 07 East Tennessee Race Prep Lotus Super Seven from 14th on the grid to ninth to earn the Sunoco Hard Charger Award.

Live, online video coverage of Runoffs races, presented by Mazda, is available throughout the three days of competition at SCCA.com/live. An audio race call, supplied by the Super Tour Radio broadcast team, is also available at www.SCCA.com/live , as well as live timing and scoring for each National Championship race.